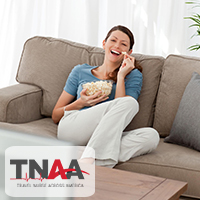 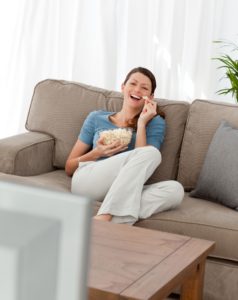 You’ve just finished a shift, your legs and lower back are aching, and your brain desperately needs to relax. After you get home, you consider laughing the stresses of the day away with the help of a funny movie. But where do you start? There are over 13,000 titles available on Netflix and new ones are added all the time. We’ve scoured the database to find the five best comedies on Netflix so you can log in and laugh. Enjoy!

Hot Fuzz (2007)
In this British satirical action-comedy film, Simon Pegg plays Nicholas Angel, a London cop who is transferred to the quiet town of Sandford unexpectedly. He’s paired with Danny Butterman (Nick Frost) who questions him non-stop about the action he saw as a cop in a big city. It’s all going well until two characters are found dead.

The deaths are deemed an accident by people in the slow-paced village, but more “accidents” occur and Angel and Butterman are the only two trying to find out what’s really going down. This critically-acclaimed and commercially-successful film is a sure thing if you’re looking to laugh and don’t mind a bit of gore.

Mean Girls (2004)
For guaranteed laughs, most movies can’t beat the coming-of-age comedy Mean Girls starring Lindsay Lohan. Lohan plays Cady Heron, the new girl entering a high school full of cliques and catty behavior who is completely out of touch with American pop culture and relationships. She joins The Plastics, the A-list clique at the school lead by Regina George (Rachel McAdams), but falls for Regina’s ex-boyfriend Aaron Samuels (Jonathan Bennett). Her intention was to take down the school’s meanest group, but she becomes one of them instead.

Mean Girls is based off of a book by Rosalind Wiseman and the screenplay was written by Tina Fey. This is one of the most quotable movies of its time, creating favorites like, “Boo, you whore!” and “Stop trying to make fetch happen!” It’s also a fun throwback to mid-2000s style. Who would remember that belly shirts, hot pink and platforms were popular then?

The Princess Bride (1987)
An oldie, but a goodie, The Princess Bride is told by a sweet grandfather to his ill grandson. The story comes alive as he spins the tale of love and adventure. The beautiful Buttercup (Robin Wright) is engaged to Prince Humperdinck (Chris Sarandon) and is held hostage to start a war. Westley (Cary Elwes), her childhood sweetheart, has to save her and he gains hilarious and memorable companions (Mandy Patinkin and Andre the Giant) who help him with his quest.

The Princess Bride is one of IMDB’s top-rated movies and it was nominated for an Oscar. Billy Crystal plays Miracle Max, a hilariously curmudgeon miracle-worker, and his portrayal caused Patinkin to bruise his ribs from trying to hold in his laughter during their scenes together.

Wet Hot American Summer (2001)
A cult-favorite, Wet Hot American Summer stars actors who eventually rose to the stratosphere of Hollywood (although not thanks to the film, it flopped when it was released). Bradley Cooper, Paul Rudd, Christopher Meloni, Amy Poehler, Janeane Garafolo, Michael Ian Black and Michael Showalter are several key players in this film based on the last day of summer camp.

This film wraps up all the hormones and chaos of teenagers at summer camp with an appearance by a talking can of vegetables and Christopher Meloni’s uncomfortably close relationship with a refrigerator. The follow-up series Wet Hot American Summer: First Day of Camp, which is also available on Netflix, is worth a watch, too. Binge on!

Zoolander (2001)
Another instantly quotable film, the “really, really ridiculously good looking” Zoolander was a hit when it was released. Starring Ben Stiller as Derek Zoolander, a top model who realizes that life is about more than the shallowness of modeling, who teams up with Hansel (Owen Wilson) to take down Mugatu (Will Ferrell) who has plans to kill the Malaysian prime minister. You can’t go wrong with this comedic trio whose antics are still “so hot right now.” Zoolander 2, which was released this year, isn’t available on Netflix yet (but you’re not missing much!).

Why Pick a Comedy?
As a nurse, you know the benefits of laughter and that it’s one of the most powerful antidotes to stress and pain. It relaxes your whole body, boosts your immune system, triggers the release of endorphins and protects your heart – so what are you waiting for? Make watching a comedy part of your post-shift wind down routine!

Nurse Resources
How to Resolve a Payroll Issue
© 2020 Travel Nurse Across America®, LLC